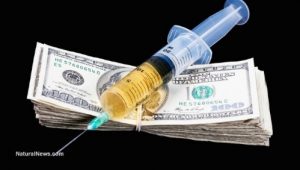 Making the choice to vaccinate or not to vaccinate has become a difficult and sometimes contentious issue in the United States and the globe. But it’s not just your newborn child who is targeted. Adults over 65 have been added as eligible for conquest by Pfizer’s Prevnar 13, the pneumococcal pneumonia vaccine with $6.4 billion market, and currently the number one selling vaccination in the world. The marketing and regulatory schemes to jab Prevnar 13 into your grandparent’s veins is no different than “Merck’s Gardasil franchise” pushing the HPV boys age 12 and 13 in the U.K.

The vaccine list of ingredients, as reported by Procon.org is also very troubling. Additionally, your family, friends, educational institution and your Western-trained physician might believe you shouldn’t have a choice to “just say no” to any vaccine. It is imperative that the decision to utilize vaccines remains an act of free will. For those who are curious about the vaccine-free route, there are studies that demonstrate that unvaccinated children are healthier. Natural News has reported on one particular study done in New Zealand that showed “vaccinated children are actually much more likely to suffer from chronic diseases like asthma, eczema, tonsillitis and a host of other health conditions, compared to their unvaccinated peers.”

This New Zealand study was performed in 1992 by the Immunization Awareness Society. It was a small study that included just under 500 individuals. Of this group, 45.6% were vaccinated and 54.3% were unvaccinated (numbers do not add up to 100 due to rounding).  Those taking part in the research were asked if their children had experienced maladies like ear infections, asthma, epilepsy, diabetes and others. Also, included in the questionnaire was information concerning breast or bottle feeding and whether the child had difficulty developing motor skills like “walking, crawling, sitting up, etc.”

The researchers discovered tonsillectomy operations were required in 92% of the children who had been vaccinated for measles. In terms of other chronic conditions, the study found “solid scientific evidence” that the children who were unvaccinated were in better health than those were. Health Impact News reports about another 2011 German study done with 8,000 children. The participants ranged in age from newborns up to 19 years old. This much larger group of respondents, collected via an internet questionnaire, showed that children with vaccinations were “five times more likely” to suffer from allergies, bronchitis, ear infections and other diseases.

The website Vaccineinjuryinfo.com has an ongoing survey comparing the disease rates between vaccinated and unvaccinated children. They have kept track of over 15,000 children under the age of 2. Partial results have demonstrated that unvaccinated children have less anxiety, depression, speech disorders, celiac disease and gastrointestinal disorders. Why doesn’t the U.S. Center for Disease Control do any long term comparisons to children vaccinated to those unvaccinated? Perhaps it has something to do with who they are really working for.

Television is replete with pharmaceutical ads with smiling faces asking you to “ask your doctor,” while the voice over speed reads the devastating side effects  – increased blood pressure, inflammation, stroke and death. You can always turn that big box off, or throw it out of your house.  You can also do the research you need to say “Yes” or “No” to the latest vaccine propaganda from big pharma. And, with good organic sources of turmeric and chlorella available, you can also help support your immune system naturally.