FOUR SECRETS TO LONGEVITY FROM OKINAWA, THE LAND OF IMMORTALS - MindBody Medicine

FOUR SECRETS TO LONGEVITY FROM OKINAWA, THE LAND OF IMMORTALS

Knowledge / Articles / FOUR SECRETS TO LONGEVITY FROM OKINAWA, THE LAND OF IMMORTALS
Share this...

FOUR SECRETS TO LONGEVITY FROM THE CENTENARIANS OF OKINAWA, THE LAND OF IMMORTALS

Want to know how you can live a healthy and long life? Here’re four secrets from Okinawa, which was once known as the land of immortals. 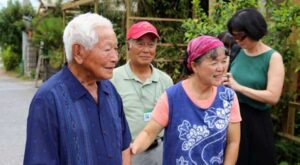 Okinawa, a Japanese island in the East China Sea, has historically been known for longevity and it was once called the land of immortals. The Japanese archipelago is one of the world’s five ‘Blue Zones’ and it has the highest concentration of centenarians, which is basically a person who is 100 years old or more. So, according to several studies, Okinawans can teach us a lot about living longer by simply following a healthy lifestyle.

Here’s a list of 4 secrets we learned from Japan’s oldest people!

‘Ikigai’ is a Japanese word which means finding a sense of purpose or a reason to jump out of bed every morning. It is a holistic exercise advocated in the Japanese culture which allows a person to identify and move towards their passion in a structured approach. Okinawans believe that one must take up a hobby to live purpose-imbued life that gives them clear roles of responsibility and feelings of being needed well, even in their 100s.

Most older Okinawans have been on a plant-based diet since their childhood days. Their meals include stir-fried vegetables, sweet potatoes, soybean and tofu, which are high in nutrients and low in calories. They also observe the 80 per cent rule, where they have to stop eating when their stomachs are 80 per cent full.

Did you know most Okinawans are active walkers and gardeners? According to various reports, the centenarians of the region either grow or once grew a garden in their backyard and the activity helps them fulfil their daily quota of physical activity and exercise that the body requires. Other than helping the centenarians stay active even in their 100s, gardening also acts as a constant source of fresh vegetables, herbs, fruits and natural medicines.

The Okinawan tradition of forming a moai is all about building a strong social network and having as many close friends as possible. The secure social networks eventually lend financial and emotional support in times of need, giving them the stress-shedding security of knowing that they are not alone.